Baraminology from Past Generations

Todd Wood has a new paper out on some of older discussions of baraminology from the 1500s and 1600s. It's very interesting because while it predates baraminology by several centuries, the framework of thought is already there. For instance:


Anyway, it's interesting to see that although most Creationists in the current century knew little of these older works, that these answers are not unique to our generation, but have been recognized century after century.

Over the last 100 years, Creationism has been on the defense from Darwinism (laid out by Darwin, obviously) and Uniformitarianism (laid out by Lyell). This has affected both the attitudes and mindset of those who were engaged with it. Rather than being a pioneering field, Creationism went into apologetics mode, where rather than search out new ideas using the Bible as a basis for understanding, Creationists simply aimed to defend the Bible from attack. I don't want to criticize that per se. I think it is useful and has its time and place. I do this myself on occasion (though rarely on this blog). However, I do want to criticize the general shift of emphasis from placing investigation as the first priority to placing apologetics as the first priority and investigation as a far second.

Thankfully, this trend has been reversing over the pas 10 years or so. But you may be wondering what the problem is with Creation Apologetics. Well, the issue is that doing apologetics tends to miss the point. This may seem counterintuitive, but lets look at a few classes of people who may be considered "open" to receiving the Creation message.

One kind is the "questioner". Someone who has lots of questions and few answers. The problem with apologetics here is that apologetics does not usually seek to engage the other person in their questioning, but instead to provide immediate answers. Whether or not the answers are correct, they completely miss the frame of mind of the one who is a questioner. They want to think through things, and know both what they can and they can't know. Apologists rarely even talk about problems with their theory, and thus leave the "questioner" thinking that they have talking to a used car salesman.

There's a great video dealing with questioners here. This type of person will not deal well with who puts forward a "canned" list of answers.

Another kind is the scientist. People often get the mistaken impression that scientists, and even biologists, are even vaguely represented by people in places like The Panda's Thumb or Talk.Origins. This is simply not the case. In fact, if you look at a lot of the big names there, very few of them are notable biologists. For instance, Nick Matzke's graduate work was in geography, not biology. This isn't to say that none of them (including Nick) know anything about science, but it is a mistake to think that these people are representative of scientists. Most scientists don't have the faintest care what are in the contents of Talk.Origins' index of Creation Claims, or what the Panda's Thumb blog says, or what is on Pharyngula. Most scientists are too busy teaching, researching, experimenting, and writing grant proposals to care about such things. So, while things like the responses to the index of Creationist Claims (also see this list) are useful (I myself have contributed to this from time to time), the fact is that if you are wanting to talk about Creation to a practicing scientist, they are not likely to care.

Jean Lightner permitted me to share this email, and I think it is relevant to this discussion (I've bolded the really interesting parts):

... my scientist/teacher friend who is now voraciously reading the creationist materials I give him, made a telling comment years ago when I first brought the subject of creationup. He said he had only seen one small tract on creation and that he was rather unimpressed. He thought that the arguments they used were a bit silly, but after looking through the on-line curriculum he taught and how it presented evolution, he admitted that maybe it was because of how evolution is presented (as an evolutionist he found the curriculum a bit embarrassing).

The bottom line is this: if you spend your time refuting talk origins material, many scientists will be unimpressed and it is NOT because they are opposed to hearing about creation. Instead, it is a reflection of you using a 'scientifically challenged' source. The best way to present creation to a scientist is to find out their field of study and offer them material by creationary scientists in that field. Dealing with axioms is important too, but then emphasize what will be most familiar to them. Have the courtesy of letting the Holy Spirit do the work. God spent 80 years preparing Moses to lead the children of Israel out of Egypt; we can give him a few years to work on the heart of an evolutionist.

More scientists are open to examining the creationary viewpoint than many of us realize.

The point being is that Talk.Origins vs. Creationists is not a scientific discussion, but rather a discussion of dogmatists and apologists on both sides. That's why such discussions never seem to move anywhere except in circles. Instead of being continually engaging in argument, the Creation Research proposition instead frees up the Creationist to push science forward, and lets the Holy Spirit be the one to do the convincing. Wouldn't it be great if scientists all over the world were reading CRSQ or JoC or some other creationary publication because it consistently had the most fascinating biological discoveries? Don't you think that that would be the best way to keep the gospel message on people's minds to let the Holy Spirit work?

Anyway, I think as we move from apologetics to research, we will find that we no longer need to be apologists.

The Edmonton Journal, Alberta's leading daily newspaper, has the Big Valley Creation Science Museum (no, this is not AiG's museum, this is another one in Canada) on its front page! The article is surprisingly positive -- you can read it here.

It also made the front page of the Calgary Herald as well, but I don't have the link.

Anyway, this is particular interest to us because Ian Juby (who allows me to post several of his reports on this blog) is one of the key players bringing that museum together.

The video below is their introductory video.

CRSQ recently published a paper (and made it available online) called Polystrate Fossils Require Rapid Deposition. It describes many polystrate fossils found, including polystrate trees in coal. The model that the paper describes for the formation of the fossils is a floating vegetation mat - "trees dropped vertically into the strata from a log mat floating on the water during the Genesis Flood...During the Genesis Flood, vegetation dislodged by rising waters would float. Many trees would float in a vertical position because of their heavy root ball"

Some of the evidence:

It is interesting that some of the petrified logs are both permineralized and coalified. Some logs were petrified on the interior, but coalified on the exterior. Figure 17 shows one of the numerous trees left by the miners after excavation of the third coal mine. The tree is coalified on the outside, but coalification only locally penetrates into the interior of the tree. In some of the trees with rings, the rings alternated between petrified and coalified (Figure 18). We do not understand the meaning of this pattern.

The second half of Ian's email is also about polystrate fossils. Ian Juby has been examining the Polystrate fossils at Joggins and has been taking lots of photos. Here's the rest of his email:

Here are three photos from Joggins:

The first one is a wide-angle shot of the cliffs so you can see the tilt to
the south, and the planation surface across the top. There is only one thing
that could plane the edges like that, with no differential erosion visible:
The receding flood waters.

The second one is a polystrate that seems to be everyone's favourite, but it's
actually quite small - maybe cutting through six feet total of strata.

The third one is a nicer one, the ruler on the right is 50 cm long, in 5 cm
increments.

Here is the first part of a message I received from my friend Ian Juby, slightly edited (the second part is a different subject which I'll post later):

Here are two photos of stalactites:

Yes, the second one has my dirty, grubby paws in the photo for scale - what
can I say? I'm a working man! Cut me some slack *grin*

These stalactites are one year old. I know this because a year before I went
through this hydroelectric dam and cleaned house, collecting all the
stalactites for creation museums. When I came back a year later, this is what
had grown.

Vance Nelson and I had X-ray diffractometry performed on these (Rocktell labs,
Calgary, Alberta, Raymond Strom, operator) and stalactites Vance had collected
from other man-made structures around North America. The skeptics have
claimed that these fast-growing stalactites are chemically different than cave
stalactites, and that's why they grow faster. What we discovered (and proved
by X-ray diffractometric chemical analysis) was that reality was the exact
opposite: The fastest growing stalactites (the ones from the dam) were the
most chemically identical to cave stalactites and the ones which were the
dirtiest, most chemically different from cave stalactites grew the slowest.

I've added a Google "custom search engine" to the right-hand column, which weights articles and sites I think Creationists would find informative. Still tweaking, but it might be useful to you all. Any informative sites that you all think I should include, let me know. Looking primarily for sites that will include original research or in-depth articles. I've actually left off AiG on purpose, because they are so easy to find in Google anyway (this doesn't mean that they won't show up on your searches, but just that I don't give them a special weighting), though I might add some of their most relevant articles.

Anyway, I can bump up entire sites or specific articles, so let me know what you think should be included.

Perhaps a good bibliography of secular research that I could bump up would be good, too.

New Baby (now with a picture)! 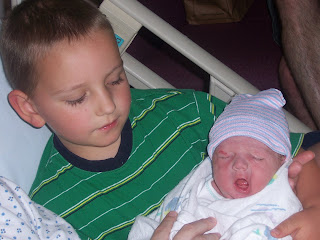 Crevo baby #4 has arrived today! He weighs in at 7 pounds 9 ounces, born after approx. 36 hours of labor. We had a wonderful doctor who helped us through it.