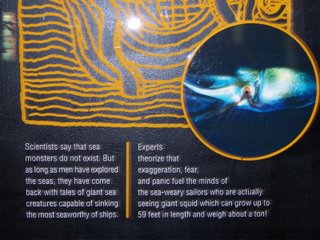 I was at the Tulsa Aquarium this weekend, and there was a hilarious display I thought I'd post to you all. Apparently, the first half of the display was written by a completely different person than the second half. The first sentence: "Scientists say that sea monsters do not exist." The last sentence: "... actually seeing giant squid which can grow up to 59 feet in length and weigh about a ton."

Now wait... is there anyone who would not consider a 59 foot squid a sea monster? So it seems that scientists are saying that sea monsters do exist. Yet the first sentence insists that they don't.

Anyway, it seems that this is a slight case of chronological snobbery. Is it just too embarassing to agree that some sea monsters really exist and are verified by science? Are we so needing to "intellectualize" things that we can't admit when people in the past are recording real things that we might not have believed had we not seen them ourselves?

ID and Creationism -- Of Holy Wars and a Plea for Peace

Intelligent Design seems to be the whipping boy of nearly every community. The Darwinists accuse the ID'ers of being Creationists, and the Creationists accuse ID'ers of either being evolutionists or of leaving out important details. I've thought about this for a while, and I think I finally discovered why ID is so hated -- neither of these communities has a clue about what Intelligent Design is all about.

The problem with both the Darwinists and the Creationists is that they are trying to look at Intelligent Design as a theory about origins. It simply is not. I understand where the confusion comes from -- ID'ers tend to say a lot about the origins debate. But the fact is that ID is not a theory of origins, but rather a theory of causation.

ID's main idea is that agency (also called "will" or "mind" -- I try to avoid "mind" because it is too intertwined with physical notions of the brain) is causally distinct from chance and necessity (also called natural law). This is not to say that agency is totally independent of the other two, only that chance, necessity, and agency have distinct ways in which they influence the world. This might not seem revolutionary to many, but to formally include agency as a causitive force in science truly is.

And so, being a theory of causation that recognizes agency as a distinct form of causation, ID continues further as a study of causation, focusing on a rigorous study of how agency operates. This is not to say that they plan to have a deterministic model of agency (if that were the case, it wouldn't be agency but necessity), but instead that one is able to study the patterns of effects that agency has on the world.

So how come ID'ers are always involved in the origins debate? It's actually very simple. ID imposes causal requirements on any origins theory. There are two types of requirements I can think of that ID speaks to (there may be more). The first is the existence of agency in the first place. If agency is a distinct form of causation, then it cannot be the product of material causes. Therefore, since "choice" is a fundamental part of our everyday experience, that means that we cannot be solely the product of material causes. Therefore, any explanation of our origins must explain where our choice comes from. This means that there must be a non-material cause at the beginning of the universe, which has carried through until now, or that a non-material cause from outside the universe has come in and endowed us with intelligent agency at some point in the past. In either case, the causal chain of agency must be explained. If it has been here all along, then a theory of origins must account for its workings or else be incomplete. If it was introduced, a theory of origins must account for its introduction or else be incomplete. Second, ID claims to be able to detect effects that are exclusively in the range of agency. Therefore, if such effects are detected, we know that an agency must have been involved.

Therefore, with regard to origins, Intelligent Design can be regarded as a sort of a meta-modeling criteria for origins theories.

Now, the main criticism from Creationists is that Intelligent Design will not lead someone to Christ. And that's true -- it won't! But neither will physics, chemistry, or any other science on which Creationism uses extensively. The problem is if ID is used in place of an origins theory, then Creationists do in fact have cause for worry. But if instead ID is used as a science on which Creationism can draw like any other science, then I think that it is to the benefit of Creationists to be both actively involved, aligned with, and supporting Intelligent Design.

So the reason that we should be with ID is not because it is such a great origins theory, but instead because it is not one at all. It is the first real attempt to systematize data and theory dealing directly with intelligent agency.

[Note -- I wrote a post similar to this at UncommonDescent the other day, if anyone is interested]

Withallyourmind.net has an interesting post on faith and facts.

Knockout experiments have also been used to argue “junk DNA” is junk. This is out rightly bad science, but it persists because of Darwinist’s eagerness to close their eyes to design and paint various artifacts in biology a the product of a clumsy blind watchmaker rather than an intelligent designer.

The strategy of using several different means to achieve a particular goal where each of the individual means is sufficient by itself to achieve the goal is used in many engineered systems to ensure that the goal will be achieved, even if one or more of the means fail. For example, the space shuttle’s on-board inertial guidance system, consists of five redundant computers!

The conversations in the comments are good, too. In them, Salvador makes another point I think is interesting:

The reading of compact discs have a huge number of read/write errors (call them mutations if you will) designed into the system which are then corrected via Reed-Solomon coding. One would be inclined to ask why not make more reliable read/write processess so error correction is not needed, and why deliberate design a system with a high error rate. The answer is that if one’s teleleological goal are for compactness of storage, according to Shannon’s theorem, this is the optimal way to store data: “allow numerous errors and then correct afterward”.

The unititiated however, upon looking at this method of information storage would be inclined to criticize the designers as incompetent. I heard biologists say exactly that, “a competent designer would not have made DNA copy mechanisms which require error correction, he would have made a copy process which got it right on the first pass.” I shook my head in disgust, and I then proceed to set them straight on principles of information science.

Regarding “imperfect copies” like pseuodogenes and the like, in addition to considerations of when “imperfect copies” are desirable based on Shannon, we have in information science the concepts of lossy compression and software revision control systems. Further, an imperfect copy may be vital piece of instrumentation (gee, is it possible that an imperfect copy is actually a counting register? Could it be telomeres are not really junk DNA? I point the readers to what I wrote regarding those “imperfectly copied” telomeres and Geron Corporation: How IDers can win the war. [emphasis mine]

The idea that there exist counting registers and the like in DNA is very interesting indeed.

You can now get the BSG 2006 Conference Proceedings from the BSG website.

The conference ended today with quite a bang. We were honored with the presentation of Art Chadwick on his Dinosaur digging. You can check out his dig site here. He is the first person to use high resolution 3D GPS mapping for his paleontology digs (here is one of many bone maps on the website). He has recorded the 3D location of every bone that he has excavated. He also has every bone recovered in an online catalog.

He has gathered some great data doing this. Likewise, he has shown that the river deposition mechanism proposed for beds such as these doesn't hold up, but that the deaths and burials were catastrophic. He talked a little more in-depth about how it was consistent with the Noachian flood, but I'm writing from an airport so I don't have my notes out.

Over the next few weeks I'll post some info from the various research and plenary talks as I have time.

If anyone wants to see Dr. Chadwick's thoughts on the geologic column he has written an overview.

We've gone through the core conference schedule, with only a half a day left. I was fascinated with nearly every presentation given. I had thought that I would find the theological presentations a bore, but instead they were very interesting, and pertained to many of the biological concepts being discussed.

Originally I was going to tape-record all the lectures, and then for the speakers who agreed post them on the web one-by-one. However, a kink was thrown in this plan by the fact that (1) I forgot to bring a male-male 1/8th inch adapter to hook my recorder to my computer, and (2) I didn't realize how restricted I would be in the amount of time available on my recorder when recording in high-quality mode. So, it turns out, if you're lucky, you'll get one lecture.

However, I did get several good pictures at the poster sessions, and several of the authors are going to let me share those on the web.

The poster session was fun, because we several times used the posters as a means of instigating brainstorming sessions.

Anyway, I'll describe the sessions in later posts. It's late and I need to go to bed.

DaveScot gave me posting rights on Uncommon Descent. When I post something there, I'll mention it here. The first entry is Tuning Knobs and Other Features of the Genome.

We just finished the first day of the BSG conference. I got to meet several people involved in the BSG, and talk a little about what they were working on. We spent the day in Todd Wood's Statistical Baraminology workshop, going over baraminology procedures as well as some software he has written to aid in such studies. We've talked about statistical baraminology before, but this was a good review, and reminded me why I should re-read my college statistics books :)

One of the main things that I really finally understood about baraminology that hadn't quite hit before, is that baraminology classification is not about descent. You could feasibly have two members of the same baramin which never ever shared a common ancestor. For a simple example, just imagine God creating two identical asexual organisms at creation. Their descendents will never share a common ancestor, yet it is obvious that they would be of the same "kind". Thus, baraminology classification is entirely about continuity and discontinuity, and only uses descent in the sense that hybridization is fairly good evidence of continuity.

The historical method of determining baramins by hybridization was shown to have several failing features, including:


And thus statistical baraminology is a useful tool for these many cases that cannot be resolved by hybridization tests.

Anyway, I'll ask Todd tonight if I can post the URL and a tutorial to the software.